NEW STUDY PROVES AWNINGS CAN SAVE ON ENERGY COSTS FOR HOMEOWNERS 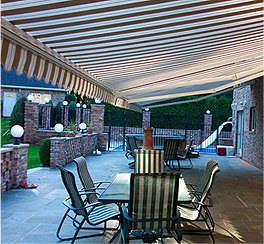 A new study has found that awnings can provide significant savings on cooling costs and on peak electrical demand by reducing solar gain through home windows. The study, Awnings in Residential Buildings: The Impact on Energy Use and Peak Demand, was conducted by the Center for Sustainable Building Research at the University of Minnesota.

The Professional Awning Manufacturers Association (PAMA) funded the study to determine if awnings are a viable means of reducing energy and air conditioner usage in the home. Most U.S. residential neighborhoods do not have a significant number of awnings, unlike Europe, where awnings are used to significantly reduce air-conditioning use in the summer. The study investigated the energy savings for single family homes and the reduction of energy use during peak periods.

In the first phase of the study, awning impacts were measured in seven U.S. cities across various climates, including, Minneapolis, Boston, Seattle, Albuquerque, Phoenix, St. Louis and Sacramento. The study revealed that in all cities for all window orientations tested, there are significant energy savings in cooling costs and peak electricity demand as a result of using window awnings. The range of energy saved varies, depending on the number of windows, types of glass in the windows and window orientation. Phase two is due for release in the near future and will include additional cities.

“Depending on the region a home is in, awnings can save homeowners potentially several hundred dollars annually, but energy savings of this degree are valuable beyond reducing homeowner’s expenses,” said Michelle Sahlin, Managing Director of PAMA. “When numerous homeowners reduce their need for energy, there is less demand for energy at the times of peak usage, resulting in overall savings to utility companies and the public from a decreased need to supply generating capacity.”

Researchers used a specialized computer program to investigate variables in conjunction with a standard awning with sides. The variables included geographic location, window orientation and exposure, winter and summer usage, and window type. For more information about the study, contact Michelle Sahlin at mesahlin@ifai.com.

If you would like to learn more about awnings in Nashville, TN, contact Total Home Solutions, today! We’ve been serving the greater Nashville area since 2011. Our business has grown from luxury retractable awnings and shade systems to include gutter guards, Solatube Daylighting Systems, and Solar Star Attic Fans. Give us a call today!